So we knew that summer would be the time to do all of the above deck jobs that need sorting from the waterline to mast head – bathed in sunshine and a light breeze with sealants and paint setting fast and jobs being ticked off. Well not in April, nor May, June, nah; try July in rain and 15 degs C with a constant F7 and a bit of windchill – so most of the ‘outside’ jobs list is carried forward and may have been added to.

Aside from that we have had a few good sessions with a 48 hour run Southampton to Brest testing our watch system (we will go with 3 hrs on and 3 off from 9pm to 9am after playing around with a couple of options). 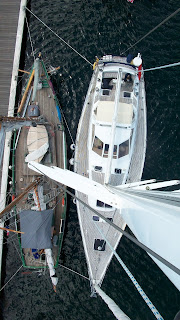 (Rafted up in Brest)

We think we have run off about 700 to 800 sea miles (the speed transducer area is too fouled to give an accurate reading and shows about 5 knots max) and in doing so:

So the boat is easier to sail than a year ago but not yet ocean ready. Still jack stays to test, the staysail (which we have not needed having only seen F7 on the water in the past twelve months) and some essential yet simple additions to be made.

We are now hauling out although we are only two thirds of the way through the season, this being our long-term plan, and with the first 18 months of ARC prep astonishingly already behind us we look forward with just 10 months to go.We are in good shape and we hope the water maker that we ordered in March will turn up sometime this autumn!

Our last sail of 2012 ran as follows….leaving Guernsey for the UK we were pretty much exhausted before we started after packing away the tender and engine on a choppy windblown sea (we will be getting the right tools to do this in Trinidad). 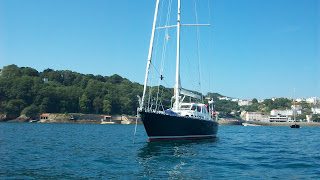 We took the Big Russell in case swell and low tide put us over any shallows in the Little Russell. The sailing began after rounding the south cardinal off Herm. In the wind shadow of Sark we struggled to get going but eventually settled under full sail dragging Kew Gardens with us under the hull which has accumulated a layer of weed.
We were following sistership Trintella 49 Heavy Metal back to the UK and they were fast so all hopes of getting some inflight pictures faded as they extended their lead on us. It was great to meet up as we had almost crossed paths so many times. It was as if the boats were in front of a mirror…. 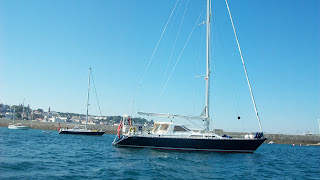 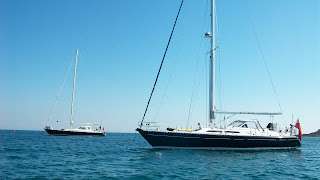 Back to the journey…then came Alderney – we had no choice but to head straight for the cliffs on a NW heading and as we closed the south of the island we were hitting 22 knots wind so we put in the first reef. The opposite tack took us back in the direction of Dielette and 3 miles off the cliffs wind dropped to 10 knots or less so we slowed to a painful crawl. Another tack and we were back on with rising wind and this time reaching mid-island – it was clear that it could have taken hours to get clear to the north and a 3 mile tack is painful stuff on a short-handed boat of this size especially if the check stays need stowing.

As we headed into the Channel, with 25 knots of wind, we took a second reef and had never flown so little sail (at 20-25 knots we are normally into our first genoa reef on a reach and pondering over a first reef in the main) but at least the mainsail reefing was working reasonably well for the first time which was fantastic. We settled into a lumpy beat and the sail power was sufficient to have the joinery lightly creaking in the galley.
With working mainsail reefing a new world opened up to us and we could now think about sail balance. We were running about 10-12 degs of lee helm so should have pushed out more genoa but it already felt like we had plenty of power. And once in the comfort of a dog house its big decision to get out and push a couple of buttons. The odd wave forced the bow back downwind so it was touch and go as to the value of making a sail change – maybe with a clean hull the returns would have been greater.
As we closed the IoW we were unable to point toward the Needles Channel and pointing higher dropped our speed to about 5 knots so we opened up a bit after being over-powered west of St Catherine’s point with 30 knots of wind.

So we sailed as far as we could before motoring into wind through the North Channel and up the Solent for perhaps the last time for a number of years.