Aditi went into the water on the 1st June and was towed to a berth in Lymington.

Our first sail was on Friday 3rd June – here is Paul’s take on our first adventure!

The first few hours under new management are always going to be a bit hair raising! The plan was wait till full tide at Lymington, back out in the nice sunshine and drift to Alum Bay to anchor for the night and play with stuff that needs sea water to work. Then head East next day….and of course first thing is it’s blowing F5 directly abeam on the berth which is not that far from the sea wall to leeward and we have no clue what’s going to happen….

Been a long and intense stretch to get to this point – how to load such a huge mainsail – just about lift it on deck between us, no way can we unroll it here…put it on the roof? no chance, idea, roll it back to pontoon and lay it out alongside…well this is it if we unroll it we will never be able to pack it again so this is a commitment….getting battens in until after dark but still only managed to get a few in place – how do you do that when they are metres long and you cant push through the cloth weight, lash rest of them to the side. First find how to switch on engine….control panel dead….start battery on, panel switched on, try to follow start cables, inspect behind panel…no idea why it’s lifeless….lot’s of searching….aha, a trip switch behind an electricity meter….on…alarm goes for oil pressure….panel alive, pre-heat, start – jump out of skin…what kind of huge truck engine was that firing up – like a diesel train! Can’t get bow thruster lowered, Claire found the switch before, finds it again, going down, working yes, gears yes. Let go…Off we go, let go the lines and ease it back…..bit of forward and stern thruster to keep off the pontoon….then bow thrust and wow can you hear this thing running – say goodbye to lots of anti-fouling. Bow swings to wind no problem and can turn with on forward motion. We launched and after almost drifting with the current motoring on tick over watching depth meter anchored up near the Needles. Down went the anchor then after letting out enough chain the windlass kept running so chain starting piling up uncontrollably on deck – cut the hydraulics quick – stuff chain back down the tube again. Found we had used about 50% of available fuel in the 3 miles (we run off a small day tank and not the big main tanks – the small tank has to be constantly filled and only holds 25 litres) – no idea how to lift fuel from main tanks – start the search under floorboards – find a few taps then a few more – then gamble that we have found a manual fuel pump – and yes diesel on the rise as we pump this big brass handle – plenty more of that before the night is out….then the heads – no idea how they work – find a few more bits and pieces – set sail, wind gets up, tide goes against wind, start bashing to windward – should have put all battens in the sail, now it’s flapping loudly, the rig is really flexing, forestay & furling going tight, loose, tighten up on check stays (wondered how we would know when to use these) no change, crank up backstay (wondered also when we would ned this but it’s all coming clear already), on a nice tack – not tacking again in a hurry too much work just reach on south IoW, no idea on wind as we have no instrument or windex, eventually tack after a few hours, all momentum gone and can’t get it shifting again, apparent wind was really important, eventually speed crawls up, cat not happy at the noise from sails, wind getting up, furl mainsail, winds down on the button but as soon as you stop winding lets itself out again, no choice, full sail or nothing, getting rougher, stuff crashing around, forward shower door off its track and bashing around, cat hoiks up a furball on the saloon floor, waves over the deck and spray over the doghouse roof, water coming in through the saloon ceiling & kids mopping it up, my dinner goes flying, scoop up and back in bowl, cold dinner, give up the idea of bashing East to windward, divert to Portsmouth, arrive midnight – no berths, eventually find a place at 1am, all agreed a good day of thorough testing and a few things to sort out…….probably wouldn’t chose to test like this but the test program has been somewhat accelerated…….we are exhausted by weeks of prep and nervous energy…. 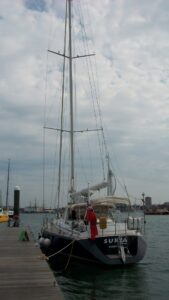 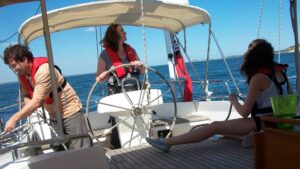 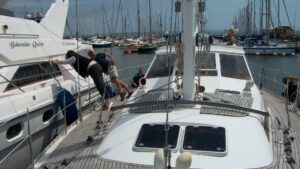 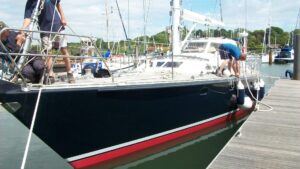 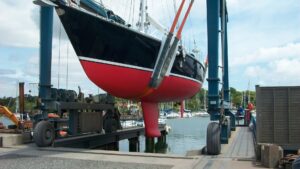 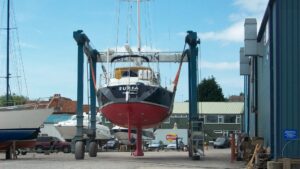