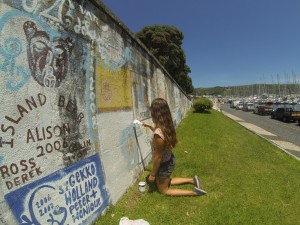 So having claimed our square and painted our white background over the completely faded blue something or other by midday we returned at 16.30 to start the next layer. Our white background was still tacky so we watched the Brazil world cup game nearby. At 7pm it was looking good but it was too damp to start anything new.

Returning next day we were outraged to find that our square had been painted! Can you imagine another boat helping itself to your pre-prepared section of wall. We couldn’t believe it but there it was. A green chameleon, the boat name Kris Kras, and the names of ten crew.

The hunt for this elusive ship was on! But we know most of the ships in Horta and there was nothing in town that could take 10 crew. Had it hit and run? We checked AIS and still nothing. Maybe it was a crew change with 5 on and 5 off? We walked the harbour walls but we started to think that no boat would do that surely. That and the size of the crew made us wonder. So a wider search revealed it was a coach trip from Kris Kras 18-30’s holiday company in Belgium who preach respect for culture and people! Yeah right. Exporting professional art thieves more like!!!

As Boy George used to say ‘….Chameleon….you come and go’. Now it’s gone. I guess he had a level of foresight.