Tumbling at a rapid pace in the now larger seas. Crew are lethargic, life onboard is uncomfortable and the simple unknowns pushed it all over the edge. The lead up to this point is as follows: One primary winch comes and goes which is unsettling re mainsail reefing or mainsheet control. The headsail reefing is already a Harken mini winch handle operated at the anchor roller! The sea state is a mess as the waves have been driven hard from the north west, then we spent most of today in 28-33kn Easterly, then ESE, now we are due to be seeing SSW to SW! As the wind has dropped we have lost some sail power & stability with the sea being little changed. Nobody understands the ARC weather forecasts . What is an inverted low? A cut off gale? (google a cut-off gale and all you will get is a bunch of cricket so it’s not just us!). The forecasts only point 48 hours ahead so at end of day we can’t plan our next move as the window is so short particularly with half the day gone before we get the SSB download.

Go west? south? wait? The immediate wind prediction is good and we reef to it, plus 50%, at dusk. Forecasts are issued too late in the day as SSB propogation is a problem in daytime so we have to fight for the info. So the advice was to go south, now it’s wait for a squall line to pass and go straight across. We think this means a close reach but no data so no idea. As I expect many tracks show navigation is a guessing game. We ran initially SSW then forced SE all last night in about 28kn targeting Mindelo. But the wind veered so then had to run W all day in 28-33kn.

The Cape Verde pilot warns of steep seas on eastern approach as depths drop 2500m to 80m with current poss. 1kn against wind in the channel to Mindelo. Plus a venturi system between the islands which can double wind speed. With the growing sea state we decided not to risk landfall. Instead we rigged lines and blocks for a staysail or storm jib in case we hit a squall when already in 30kn. Last night’s grib files predicted a peak of 7kn. It then shows W or SW winds for days. We have now changed course from West to SSW heading for Mindelo as we are not satisfied that we have any understanding of weather outlook for next 200 to 2000 miles.

Vital sadistics: Back on heading to Mindelo to stop & assess situation properly/take a break from the sea/consider repairs. 116nm or 85nm to go depending on side of entry.

From the galley: very little, couple of baked potatoes. I am sure we have a lot to learn about being on the ocean including dealing with the lows. 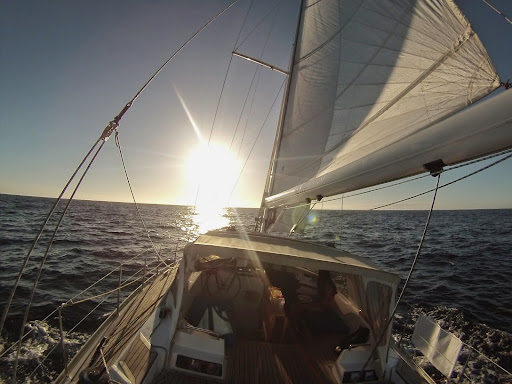